Ten years ago at a fictional high school called ‘Marketing High’, there was a group of friends called ‘The Channels’. This little gang had members such as Email, Telemarketing, Trade Shows and Print Ads. But, the leader of the posse was undoubtedly Direct Mail. He was a legend. Everybody admired him, looked up to him and he really was the ‘King of Cool’. I think he even had a leather jacket.

But, as the years went on, things started changing. Other people started joining the group, such as Social Media, and existing members thought they could challenge Direct Mail for his crown. After some playground scuffles, Email emerged as the group principal for a while, but even he found that life at the top wasn’t easy. There was always someone trying to take away his title of ‘Top Channel’.

As with all school friends, Graduation Day eventually came and the group went their separate ways. Many of them stayed friends and some of them even went on to work together, like Email and Social Media. But, nobody heard from Direct Mail for many years. It was as if he’d disappeared.

Well, it’s ten years later, it’s reunion time and the group are back together. You see, each member of the group realised that without the others they just couldn’t succeed. Only by working as a group could they all be happy and make something of themselves. Everybody was there, Email, Social Media, Telemarketing, Trade Shows and Print Ads. But there was still no sign of Direct Mail.

Then it happened. In walked a handsome man that the group didn’t recognise. It was Direct Mail. But there had been a dramatic change. His long hair was cut and his leather jacket had been replaced with a suit. When he opened his mouth it became clear that over the years he’d become a lot smarter too. Was the group to have its original leader back? The answer was no. Direct Mail really wanted to be part of the group again, but he too had realised that the only way they could succeed was if all The Channels worked together. 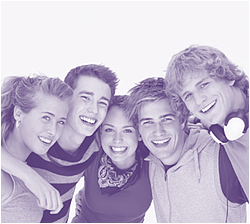 Ok, so enough of the fictional stories. Direct mail is making a comeback as a marketing communication channel, but things have changed. Gone are the days of a printed leaflet being sent to 5,000 people and hoping some of them engage and take action. Nowadays, direct mail is a highly personalised and targeted approach which sits neatly in the middle of your sales funnel.

What’s different from before? The answer is high-impact potential. Once you’ve generated a lead using a channel such as social media and qualified that lead using telemarketing, you’ll know when they’re at the sales tipping point. This is when the new direct mail comes into play. A piece of high-impact material in the right hands at this time could not only leave a lasting footprint on the mind of the decision-maker, but also be enough to secure a sale.

So what kind of direct mail should you send? Well, there’s no right answer. Start by doing your homework and researching the lead. What are they into? What do they like? What will get their attention? What is highly relevant to them? Also check out their social media presence and review the professional conversations they’ve been having. Use all of your available metrics to gain as much data as possible. Only by doing this will you be able to create the best piece of high-impact direct mail.

As direct mail has grown up, so has technology, and the options for mail pieces are now more advanced than ever. A perfect example is video mailing. There was a time when this would have been a CD-ROM sent with a cover letter. But nowadays, your mail piece can actually contain a small screen which plays a video message. Companies such as TVinaCard and Vidioh now give you the opportunity to provide user-friendly videos in leaflets, brochures and even business cards. With screen sizes ranging from 2.4 to 7 inches, they may not be the cheapest form of direct mail, but they will definitely leave a lasting impression on your sales-ready lead.

Another new addition to the world of technology which is affecting direct mail is 3D printing. This phenomena means you can create almost anything in a short space of time and then send it to your lead. If, for example, you are a contract catering company and you want to target catering managers, you could 3D print a personalised knife and fork and send it with an accompanying brochure. With every week that passes, 3D printers are becoming more accessible and costs are falling. Before long, 3D printing will be the norm so why not strike now while the iron is scorching hot and create a real lasting impression on your leads.

While direct mail was on hiatus, the sales cycle started extending. This means that a sale in the B2B world can now take years instead of months. A direct result of this change is the need for lead nurturing. So, to keep up with the times, the old practice of sending brochures via direct mail has gone. What has taken its place is customer magazines. These are a great way to ‘touch’ your leads on a regular basis and also keep your brand at the forefront of their minds. By including industry news, case studies and useful facts and figures, you can continue showing thought leadership and convincing leads that you are the best company to work with.

So there you go. Changes in technology have meant that direct mail has once again earned its place amongst the other marketing channels. But, only by utilising the entire spectrum of channels will you be able to generate the most leads, sales and revenue for your business.